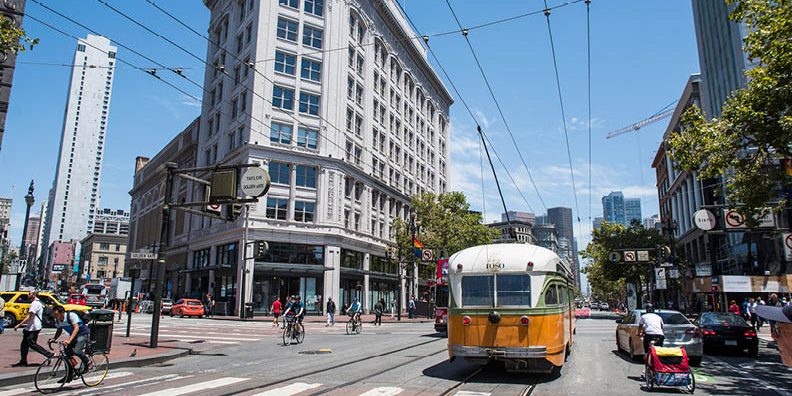 Previous efforts to “transform” distressed communities were often approached exclusively as a means of driving economic success with little attention given to investing in the human capital that also existed in urban centers transformed by industry and innovation.  “There was a slash and burn policy,” according to Leiasa Beckham, Senior Real Estate Consultant at the Community Vision (Community Vision).  “It was a disaster for many communities.”   Focusing on the totality of the assets that existed in a neighborhood took a back seat to forwarding economic priorities, and the consequences were often the destruction of whole community identities.  When a coalition of civic and community entities came together to revive San Francisco’s long-blighted Central Market Corridor in 2011, they looked to avoid these past scenarios by embracing a placed-based philosophy that is not only revitalizing a neighborhood, but is strengthening ties and building trust among neighbors.

Beckham, a 15-year veteran in real estate planning appreciates the need for innovation but knows that by focusing on cross-sector collaboration industry can not only flourish but also accelerate the flow of capital back into these communities.  “Modern community investment goes beyond accommodating new industry,” said Beckham.  “It’s about working within the framework of a geographic area so everyone benefits.”  It’s this commitment that attracted Community Vision to join the Central Market Partnership, a public-private endeavor dedicated to the revitalization of one of San Francisco’s most diverse, yet challenged neighborhoods currently experiencing something of a modern industrial revolution of its own.

Community Vision, in partnership with San Francisco Grants for the Arts, implemented the Real Estate Readiness Program, and was providing expert real estate and financial consulting services, as well as flexible loans, to local nonprofits.  Joining the Partnership early in the process, Community Vision’s role was to continue to work with existing nonprofits unprepared to compete for commercial real estate as tech giants like Twitter, Zendesk, Yammer, and others moved in.  These community-based organizations’ missions dictate that they serve community members struggling with the socioeconomic realities of this low-income urban neighborhood.

Community Vision’s team identified more than 35 spaces considered “development resistant” for tech interests that could be easily revitalized and used to preserve space for nonprofits.  “The community was a thriving art district years ago,” explains Beckham.  “There were abandoned theaters, for example, that the tech companies weren’t going to renovate but an arts organization could really take advantage of.”  Like many urban areas, Central Market had developed its own unique cultural and artistic movement that attracted a number of small urban art organizations, experimental theaters, and cultural institutions over the years.  These organizations mixed with more traditional social service organizations to create a web of services unique to this community.

Once target properties were identified, Community Vision deployed millions in New Markets Tax Credits, committed its own capital, and leveraged millions more in private funding to support renovations in the area.  Community Vision’s Consulting team also negotiated long-term leases for many existing tenants in tandem with the revitalization efforts. The result: nonprofits once facing displacement continue to serve those in most need in newly renovated facilities, adding an additional level of dignity and engagement for local residents.

These early efforts lead to Community Vision formalizing a cross-sector collaboration between the City of San Francisco Mayor’s Office of Economic and Workforce Development, The Community Arts Stabilization Trust, and Urban Solutions to establish the Nonprofit Displacement Mitigation Program (NDMP).  With a $4.5M initial commitment from the City of San Francisco, the NDMP provides financial and technical assistance to nonprofits facing displacement so they can relocate or stabilize their existing infrastructure to upgrade or acquire new facilities in the communities they serve.  To date, the NDMP has awarded financial assistance grants totaling nearly $1M to 11 social service organizations and five arts groups in San Francisco.

As you walk down Central Market today, you can see and feel the benefits of this approach, as social service organizations and community-based arts facilities mix with the bevy of new commercial development, enhanced restaurant and nightlife spots, and a growing cultural scene.  “Many people don’t consider community development a grassroots effort,” said Beckham.  “But that’s really what’s happening here.  It has been a lot of work, but it’s also very organic.