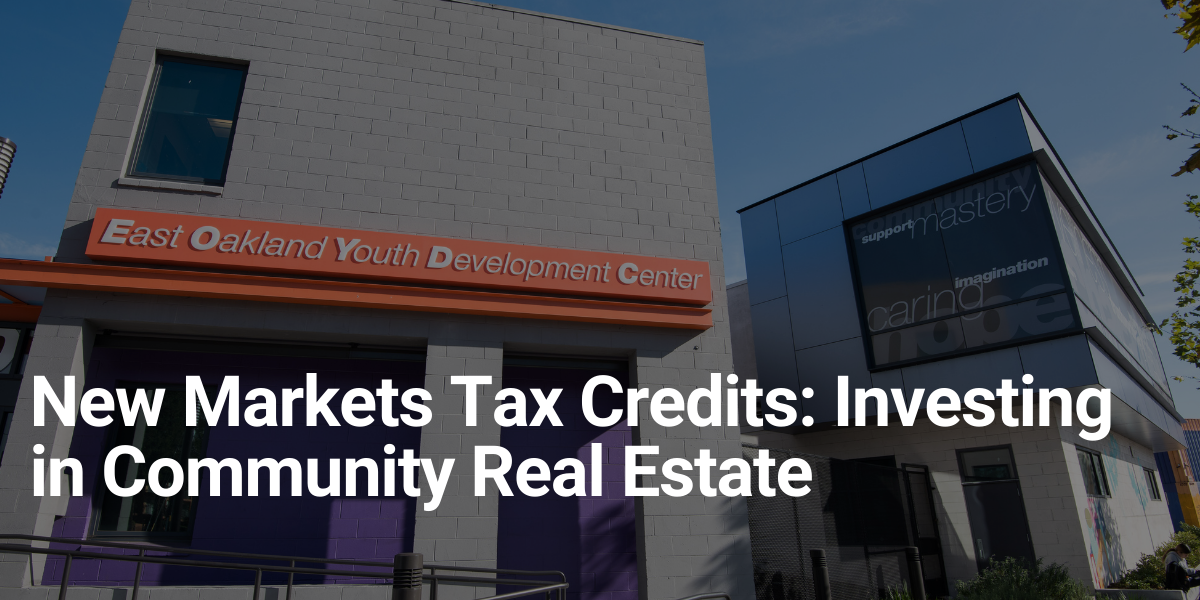 Community Vision’s partnership with the East Oakland Youth Development Center (EOYDC) began in 2012 when the organization was approaching their 35th Anniversary and developing a master plan that included renovation and a 6,000 square-foot expansion of their headquarters. At that time many of EOYDC’s programs had waiting lists and the building was limited in its multi-functional uses for recreation and education. EOYDC had a vision to create a more cohesive and comfortable environment and offer more programming for youth. After learning about New Markets Tax Credits (NMTC) as a source of financing for real estate projects, EOYDC reached out to Community Vision and the East Bay Asian Local Development Corporation (EBALDC) for technical and financial support to realize their community facility project.

The NMTC program was passed into legislation by Congress in 2000 and is designed to bring private investments, primarily from banks and larger financial institutions, into areas that have been historically underserved and disinvested. The capital raised through NMTC transactions is invested into community organizations, like EOYDC, as a source of gap financing that can fund up to 25% of a project. These loans are below-market rate and often structured at a seven year term with interest-only payments, and with the potential for partial forgiveness; making them an attractive source of financing for a nonprofit with a large-scale community facility project.

EOYDC is a nonprofit organization that offers a variety of programming and resources, free of charge, to youth in Oakland and surrounding areas. The organization started with a vision to create a space where young people can grow and flourish. In May 1973, Robert B. Shetterly, former Chairman of the Board and CEO of The Clorox Company, established EOYDC as a 501c3 nonprofit and raised nearly $6 million to build their 30,000 square-foot headquarters at 82nd Avenue and International Boulevard. The youth center was constructed five years later in 1978 on property owned and leased by the City of Oakland to EOYDC for $1 per year for a 66-year period, with the option to purchase the building at the end of their lease.

Community Vision, first provided NMTC consulting services for EOYDC. Later, when EOYDC was ready to launch their capital campaign and secure NMTC financing, EBALDC served as the project manager for a NMTC transaction. Community Vision served as a financial ally helping secure a total of $9.75 million in NMTCs; along with a $2.8 million capital campaign bridge loan. The NMTC transaction resulted in an estimated net equity benefit of $2.4M to EOYDC. In 2015, EOYDC unveiled their updated building. With an intentional weaving of old and new building infrastructure, the renovation included larger office spaces, an expanded education empowerment room, a dance studio that easily transitioned into a martial arts studio, and yoga studio, music and visual arts production, a commercial kitchen, and an outdoor deck and events space.

The seven year compliance period and loan term for EOYDC ended in early 2021 and as a condition of the NMTC transaction, the lease was extended another 66 years to 2083; essentially ensuring lifetime ownership of the building.

“Real estate projects take time and NMTC-financed projects are particularly complex. But EOYDC knew what they wanted and Community Vision is here to support anchor organizations like EOYDC by offering flexible and accessible financing. We are deeply grateful for the opportunity to partner with EOYDC to ensure they will continue to serve East Oakland in their beautiful community space for generations to come.”

In the midst of COVID-19, the organization is a trusted source for information, educational supplies, free groceries, and safe in-person learning opportunities. Due to the multi-functional uses of the building’s design, EOYDC was also one of the only agencies open for summer programming in 2020, a time when it was needed most.

“Our big beautiful building allowed us to respond to COVID-19 by offering our space in a way that we didn’t originally see as options. We were able to do that because we have the space for socially distanced learning and the trust of our community.”

As a trusted member of the community, EOYDC has been a home for generations of young people to gain and expand themselves as confident leaders and creators of their reality and future. The past two years of the organization’s history emphasizes the importance of community-owned and controlled spaces because of the flexibility in how they could be responsive to youth and their families’ needs throughout the pandemic.