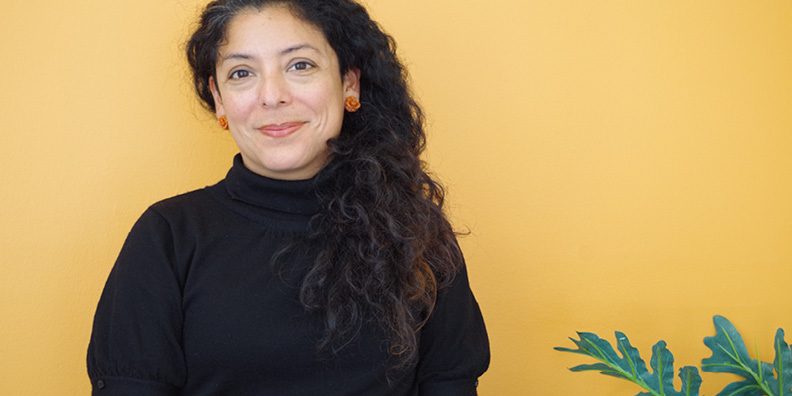 Our Strategic Initiatives team supports Community Vision in developing and supporting community development initiatives that increase our impact and support the low-income communities we serve.  In August 2016 we welcomed Esperanza Pallana, who supports our efforts in increasing access to healthy foods throughout California.  Esperanza comes to Community Vision with over 15 years in food systems, environmental health, and public health advocacy work.  Learn about a more about Esperanza below.

You’ve been with Community Vision for nearly a month now. What were you doing before?
Prior to being a part of Strategic Initiatives at Community Vision, I was the Director of Oakland Food Policy Council (OFPC).

What brought you to Community Vision? Tell us about your new role.
Since my work with OFPC focused on racial and economic equity within our food system, I became very interested in issues of land acquisition, use and rights as well as ownership of food and farm businesses by people of color. I wanted to make a shift in my career to work specifically on those issues in a way that could affect our food system to meet community needs in health, labor, wages and environment. Community Vision enables me to support both nonprofits and social enterprises doing this work. It is a profound blessing to have found such a strong match with Community Vision!

How did you first become involved in the healthy food movement? What was your first impression of it?
A little over ten years ago, I became actively involved in the food movement when I started growing my own food and raising my own animals in Oakland. I had an urban farm project called Pluck & Feather. I did it for cultural preservation and to creatively rebuild the narrative of my family’s foods culture. I was inspired by the fact that so many of my family members were suffering from diet related disease. I believe this in part due to loss of cultural practices with food, as well as predatory marketing by large processed food corporations marketing disproportionately to Black and Latino youth.

The impacts of the “Americanization” programs are not often talked about. The Americanization programs run by the U.S. government said that the Mexican diet was deficient and it was discouraged. Families were guided to eat processed white bread instead of homemade corn tortillas and nutritionally deficit green lettuce instead of fiber rich beans. Those of us on Native reservations, because of our mixed heritage, were often raised on government commodity foods. Having control over our food gives us a way to decolonize our diet and get back to culturally relevant nutritionally rich food, and the motivation to want to eat it.

It’s like that motto, “No History, No Future. Know History, Know Future.”

I saw this as a greater opportunity for community and civic engagement and I began advocating in support of expanded urban agriculture land use in Oakland. I also worked with a garden-based education program in San Francisco and was charged with fostering political will and working with parent advocates to change school food purchasing practices and policies. My impression of the healthy food movement was that it was being driven significantly by public health institutions because of the obesity epidemic. However, I found it to be overwhelmingly Eurocentric and in need of culturally relevant participatory programming. Luckily, Oakland is home to food movement leaders such as Bryant Terry, Luz Calvo & Catriona Esquibel, Kelly Carlisle, Saqib Keval, Sabrina Wu and many others who are bringing powerful stories of food, culture and justice to the national dialogue.

What’s your personal philosophy on what should be done about the healthy food movement?
To be effective as a movement, we need to get the food system out of the hands of the corporations who are exploiting food system workers, the land and consumers, and support community ownership and leadership economically and politically. We need to shift federal, state and local policies to support an equitable and sustainable food system. Also, key in my philosophy is that racial and economic equity are the first steps in a movement for healthy and sustainable food.

What do you think will change about healthy food access over the next five years? How can access to capital and consulting services support the movement?

I think we will see more stores bringing grocery items to non-traditional food spaces, like what Target and WalMart have done, but even more so. This will change geographic access to produce but it will not change economic barriers. In fact, it is well known that Walmart employees often have to supplement their inadequate wages with food assistance programs to even purchase the produce in the store. This means that the industrial agribusinesses that are being subsidized to exploit workers in cultivation and production are now contracting with large retail stores that are being subsidized off the exploitation of their workers. This has got to stop. Access to capital to own our own land and businesses will help us build our own wealth and resilience in our food system. To get there we need the technical assistance, capacity building and capital investment from organizations like Community Vision.

What was your first impression of Community Vision? What do you think sets us apart?
The staff at Community Vision is committed to economic equity and seem willing to challenge the status quo. I really like that.

What inspires you?
The great number of amazing people in the food movement deeply dedicated to making a massive shift in our lifetimes.

If you could interview anyone from your life, living or dead, who would it be and why?
My great great grandmother Andrea Esparza. She migrated from Los Altos de Jalisco with her husband, mother and children. We were a large family that got recruited by the railroad company. She ran multiple small side businesses at the labor camps in addition to working for the railroad company. The family generated enough funds so that when the labor camp was closed and they were offered rail service back to Mexico, Chicago or Los Angeles, my branch of the family chose Los Angeles. They landed in Hanford, CA where they purchased several parcels along what is now Scott Street. My grandmother Andrea was known for her fierce spirit, survival instincts, courage and wit. Honestly, I just want to shoot the breeze with her. She is said to have been extremely funny. I’d also like to ask questions about the Central Valley. I want to know what she thinks about the agricultural practices, the intermittent development that occurs there, and the way in which things seem to taper off and the community is left to figure things out again. I want to know what she would attribute these forces to and mostly, I’d love her advice on what she thinks could be done. I also want her to show me how she made capirotada and birria.

What’s the best part of your new job?
The best part of my new job is that I get to retain a great deal of continuity of my work from OFPC but because of the different emphasis, I have the chance to expand my skills and grow professionally. I also have the chance to work alongside colleagues that are focused on affordable housing and nonprofit anti-displacement work. Amazing!