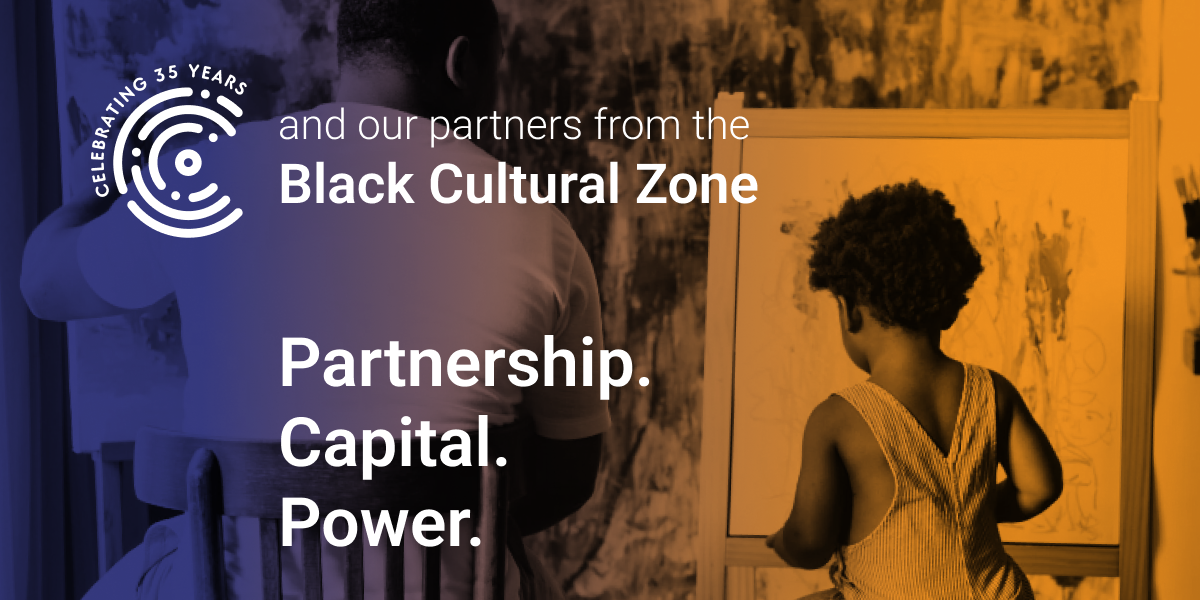 This article is part of a series celebrating Community Vision’s 35 years of building partnership, capital and power to advance community ownership of community assets. Learn more.

“This lot is an example of what happened to our community. A once useful and vibrant space became overgrown with weeds and was a dumping ground. Now, as Liberation Park, this is a space where local residents are standing up and taking ownership of the assets in their community.” – Carolyn Johnson, Chief Executive Officer, Black Cultural Zone

Designating 50 square blocks from High Street to the San Leandro border as the Black Cultural Zone, the Collaborative’s goal is to develop a hub where residents and small businesses are empowered to build and circulate wealth in their community. To advance this goal, the Collaborative incorporated its real estate entity, the Black Cultural Zone Community Development Corporation (BCZ) in 2019.

Community Vision began its partnership with BCZ by supporting the Eastside Arts Alliance, one of the founders of BCZ. The partnership included providing resources for the organization to conduct land assessments and strengthen the financial capacity to form BCZ.

In 2019, Community Vision awarded BCZ a grant for a site characterization study, which allowed them to build a strong case for the hub among various stakeholder groups and agencies. BCZ also received technical assistance from our consulting team.

In March 2020, BCZ received a license from the City of Oakland to operate a 1.2 acre lot at the corner of 73rd Avenue and Foothill Boulevard. A year later, the Oakland City Council unanimously approved BCZ for site control of the lot, a major achievement towards the goal of cooperative ownership and management of a mixed-use hub space for retail and affordable housing.

Today, the lot has been transformed into a community space and opened to the public as Liberation Park. There, BCZ hosts food distributions, movie nights and the AKOMA Outdoor Market.  In July 2021, they opened California’s only outdoor wood floor roller skate rink.

“The ultimate goal is community ownership of this space, ownership of affordable housing, commercial space, and creative space. We’re on this previously abandoned 1.2 acres, showing that we can do this, we can thrive and live joyfully,” said Carolyn Johnson, BCZ’s CEO and an East Oakland local with 30 years of experience in commercial and community development.

Next phases include the creation of Liberation Park Market Hall and Residences. The Market Hall  will be an approximately 25,000 square foot development with events, market and food spaces, a wellness area, outdoor event and community spaces, theater and cultural performance space, a rooftop garden and co-working and classroom space.

This project is expected to create 45 permanent jobs, 20 live-work apartments and, in the Residences, 120 units of affordable housing. Black Cultural Zone and Community Arts Stabilization Trust (CAST) will form a new LLC and enter into a 99-year ground lease with the City of Oakland. In January of 2022, BCZ was awarded a $553,000 grant from Performing Arts Acquisition Fund to support the project. The fund was administered by Community Vision and funded by the William and Flora Hewlett Foundation‘s Performing Arts Program.

“There aren’t a lot of developers that are like Carolyn Johnson,” said Amanda Bornstein, one of Community Vision’s Real Estate Consultants.

“She is from this neighborhood and has spent years organizing with the community and other local leaders, to build the Black Cultural Zone Hub. Community Vision is honored to provide our real estate services and guidance on this project that is a powerful example of what communities around the country can do.”