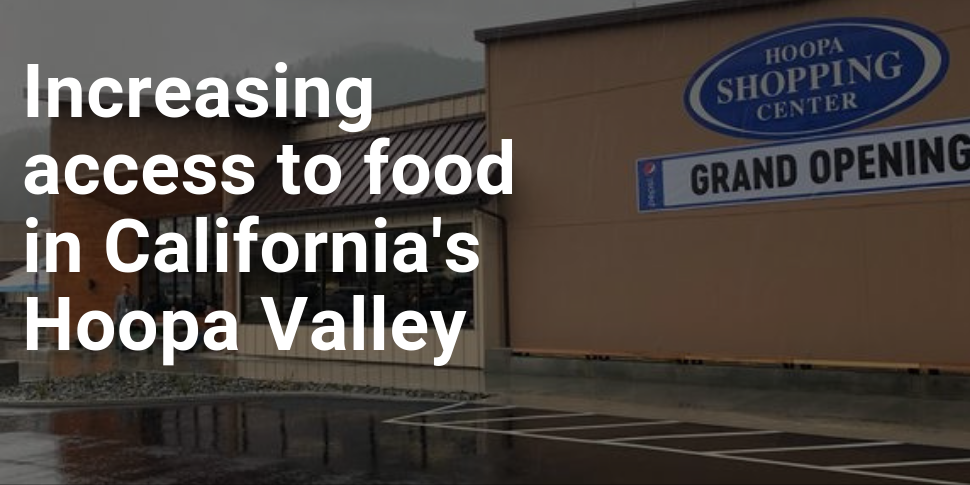 In 2016, food insecurity became a front and center issue for the Hoopa Valley Reservation when the only grocery store operating within a 40-mile radius of the Klamath-Trinity region was forced to close due to a significant rodent infestation. Consequently, the community was left without any local food retailers and was designated a food desert as defined by the United States Department of Agriculture. The rodent infestation issue gave the Tribe an opportunity to pause and assess the situation, which ultimately led them to understanding that the grocery store was not adequately meeting their needs. A lack of consistent healthy and fresh food items was one of the major concerns in the community. Unfortunately, it is not uncommon in isolated, rural areas to find grocery stores that do not carry quality food products or culturally appropriate offerings.

Whether in a rural or urban location healthy, fresh, and locally produced food options can be difficult to access in Native communities. For the people who live on reservations a common issue is that they are geographically remote and underserved by the modern food retail system. A 2016 study published in the Journal of Hunger and Environmental Nutrition states that Native communities are twice as likely to experience food insecurity as white communities. Food insecurity greatly increases the risk of developing diabetes, which is also twice as prevalent among Native people. This lack of access to healthy foods and the disproportionate burden of diet related diseases are rooted in a long history of social and economic oppression of Native peoples. Forced removal of tribes from their original lands, imposition of boarding schools on native children, the mission system, the California gold rush, federal land management practices, and water management projects like the damming of California’s rivers are some of the contributors to the decimation of Native American foodways and health.

Traditionally, the Hupa people did not know or struggle with food insecurity in part because of their reverence for and deep knowledge of the land, which once provided abundant plant and animal food sources. Hundreds of years of colonization decimated native foodways and created major public health concerns for native peoples, especially around food insecurity and diabetes. Reflecting national statistics, 18% of Hupa adults have been diagnosed with diabetes; double the 9% rate for adults nationwide.

Food insecurity is inextricably connected to issues of poverty, transportation, and geographic location of food sources. When the previous store closed, it magnified the depth of these issues in the Hoopa Valley. The Hoopa Valley Reservation is home to nearly 3,500 residents, a majority of whom are tribal members, nestled along the Trinity River and situated among rugged mountain ranges in northwestern Humboldt County. There are many people in the valley that do not own a vehicle or are not able to drive because of physical ability and/or age. But even people with reliable transportation found grocery shopping burdensome as the closest full-service grocery store was a 120 mile round trip along winding mountain roads. Grocery shopping often took a full day. Further, depending upon the season it is not uncommon for roads to be closed for days or weeks at a time due to fires, floods, and snow; making it impossible to drive outside of the valley for food. And in a community where the poverty rate is nearly 43%, three times California’s rate, the cost of gas became prohibitive for some. As for public transportation, because the county’s small population is geographically spread out it is not feasible that public transportation could effectively service the whole county’s grocery shopping needs.

As the Tribe saw the devastating effect that the store closure was having on people’s ability to access basic food items they knew they had to do something. An immediate response was to increase the floor space of the Hoopa Mini Mart Gas Station to include some canned, packaged, and frozen food items. They also began operating a weekly shuttle to Eureka, where there are full-service grocery stores and big box retailers. While the community appreciated these efforts, it was clear that the store closure amplified the need for local, healthy, and fresh food sources in the Hoopa Valley.

The store that closed had operated in the community for over 40 years, in a space that was leased by the Hoopa Tribe to a mid-sized independent grocery operator that works in rural Northern California communities. At the time of the closure, the rodent infestation and deferred maintenance was so severe that the store interior had to be gutted and rebuilt from the foundation up in order to host a new store. The Tribe approached other grocers to operate the market, but could not garner the interest for operators to come into the valley. For one, the steep, windy, and narrow mountain roads can make it difficult to bring in goods. Moreover, chain grocers do not believe it is financially viable for them to operate a store in a rural mountain region. Because the Tribe knew there was a dire need for a full-service market that offered fresh and healthy foods, they decided that they were going to operate the store themselves.

As operators of the market, the Tribe had the authority and the will to gather and incorporate community feedback into the store design and offerings. In response to that input, the store prominently features local and organic products, has a full-service deli with a meat department, a coffee kiosk, and seating areas both inside and outdoors. The Tribe also plans to bring traditional foods hunted or harvested on tribal land into the market, including salmon, deer, berries, and mushrooms. “Now that the store is opened people no longer have to make long and costly commutes,” states Chairman Jackson. “After almost three years, Hoopa Valley now has a full-service grocery store that prioritizes the needs and health of our community.”

To finance development of the store, the Tribe elected to work with the Arcata Economic Development Corporation (AEDC). Community Vision, California FreshWorks’ administrator, partnered with lead lender AEDC and FreshWorks network lender Rural Community Assistance Corporation to provide a $4,200,000 loan to the Hoopa Grocery Enterprise, an entity the Tribe established in 2018 to operate their market. FreshWorks was designed as a network of lenders that have an active interest in providing flexible capital to food business where there is limited access due to long-term, systemic disinvestment. For the Hoopa Valley Tribe, that meant it had financing partners with interest and expertise in food system financing that were able to work with the local CDFI to structure financing to complete the redesign and construction of the new grocery store.

“We’ve worked with Community Vision in the past and appreciate their values-driven approach to collaboration,” expressed Ross Welch, executive director of AEDC. “Their expertise in food systems combined with AEDC’s relationship with the Hoopa tribal government helped bring a much needed community asset to the Hoopa Valley.”