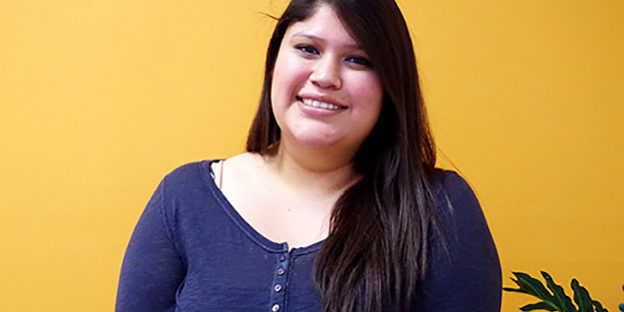 In Summer 2016 Community Vision welcomed intern Martha Rivera to the team.  From June 2016-May 2017 Martha is participating in California Coalition for Rural Housing’s Rural West Internship Program for Diversity in Nonprofit Housing and Community Development.  The program is a one-year paid internship program for university students and is designed to increase the diversity of staff in the affordable housing and community development field. Since the program’s inception, more than half of participating students have pursued careers in the community development field after completing the program.

Martha, a senior who is double-majoring in Health Science and Spanish at San Jose State University (SJSU), is supporting many departments at Community Vision –including lending, consulting, and finance.  “I never thought I’d be in the business world,” said Rivera. “All the projects I’ve worked on here have been amazing. I never thought I’d be learning so much about a field I didn’t know existed.”

Martha, born in Mexico and raised in Watsonville, comes from an immigrant family of seven. Her parents met while working in the area’s agricultural sector – her mom in the raspberry fields and her dad in the strawberry industry.  Now, her mother is a stay-at-home caretaker for her cousin with special needs and her dad delivers produce to local taquerias.  Martha recounted that some of her best childhood memories are from running through the fields with her brother in the summer.

“I do this work for my family,” said Rivera. “I always knew I wanted to go back to Watsonville and support my community. I never imagined I’d be working with an organization in San Francisco that does work in my hometown. It’s incredible.”

Martha, a graduate of Watsonville High School, is still a client of Salud Para La Gente, which provides high quality, comprehensive, and cost-effective healthcare to low-income residents of Watsonville and surrounding areas. In 2015 Community Vision provided the organization with $8.6 million in New Markets Tax Credits to renovate and expand its main clinic in downtown Watsonville, which serves nearly half of its patients and is right across the street from where Martha went to high school. “I know firsthand how much of a resource the clinic is to my community,” said Rivera. “It was so moving to be at the grand opening of the new clinic earlier this year, everything came full circle.”

Martha graduates from SJSU in May 2017. She was originally planning to pursue a career as a Spanish interpreter and now is considering a career in community development.   “There is so much potential for positive change in this field,” she said.