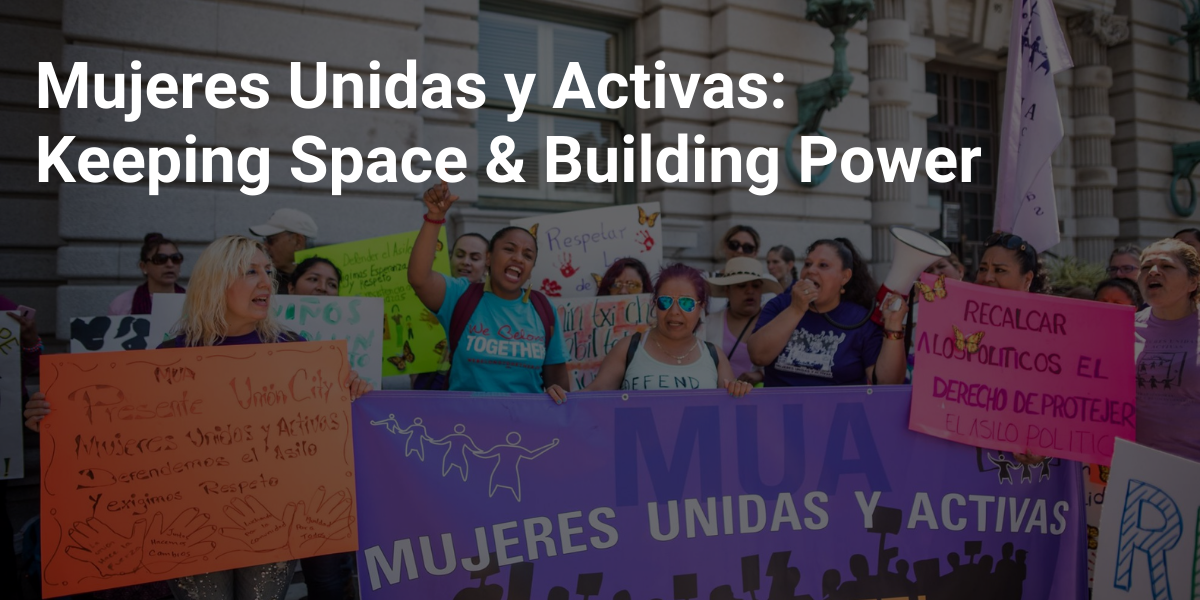 Mujeres Unidas y Activas (MUA) is a grassroots organization of Latina immigrant women who work with their community to cultivate personal transformation and build collective power for social and economic justice. Founded in 1990, they provide peer-led trauma recovery services, vocational classes, and leadership training. Their first offices opened in San Francisco’s Mission District, and in those 30 years they’ve grown to include an office in Oakland’s Fruitvale neighborhood and a satellite program in Union City.

Since the 90s, the Bay Area has experienced a widened income and wealth gap; in part, driven by historic and on-going exclusion from and dispossession of real estate through public policy and financial discrimination. The Bay Area is a focal point for displacement of people and nonprofits. A 2016 report from the Northern California Grantmakers found that nearly two out of every three nonprofits will have to make a decision about moving by 2021.

In 2017, MUA was facing displacement from their Fruitvale location due to real-estate speculation from a rapid transit development project. Searching for the right space for more than a year, MUA found a site that would meet their needs; most importantly, it was located only a few blocks from their original office on International Boulevard. After finding the space, MUA came to Community Vision for advice on the real estate acquisition. We provided MUA with guidance in negotiating a new lease and supported strategic planning for the facility. Located at 2783 E. 12th Street, MUA moved into their new space in July 2019.

It was a relief to feel so supported by a team of experts who have been through the process many times and could help us stay local, especially during times of rising rents and displacement. For us, this was a victory.

Being able to remain a part of the Fruitvale community was a priority for MUA because they wanted to ensure continued accessibility for their members who lived in the neighborhood. Oakland’s Fruitvale District, a stronghold of the Latino immigrant community, provides a centralized gathering place for organizing, leadership development, and access to social services. In the 1950s and 1960s, the Fruitvale saw an influx of Mexican and Chicano families who were being displaced from West Oakland due to urban renewal, notably the building of the freeways. Since the 1980s, a growing number of Mam immigrants have made the Bay Area their home. An indigenous Mayan community from Guatemala, most Mam people do not speak Spanish despite often being ascribed a ‘Latino’ identity. In recent years, many Mam people have immigrated to the Fruitvale neighborhood to flee genocide enacted by U.S.-backed dictatorships of Guatemala.

In 2018, to better support the growing Mam population in Oakland, MUA began training a few of their Mam-speaking members to conduct community outreach and peer counseling. In 2020, MUA hired two of their Mam-speaking members to expand the organization’s language capacities. Mam members also engaged in Census counting and provided education and support around COVID-19 for their community.

Keeping our home in the Fruitvale neighborhood has been critical for our members. This community has seen particularly high cases of COVID-19. Many of our members and their family are the essential workers who keep our economy going.

In partnership with multiple allied agencies, the MUA COVID-19 Immigrant Families Relief Fund, was launched in May 2020. Since then, MUA provided cash assistance to more than 600 former and current members who are experiencing financial hardship due to the pandemic. They will continue to raise funds for their members, as they foresee an on-going need for cash assistance due to the long-term economic and social impacts of the pandemic. You can stay up to date with MUA’s actions and events by following the organization on Facebook.