Partnering for a Thriving Central Valley 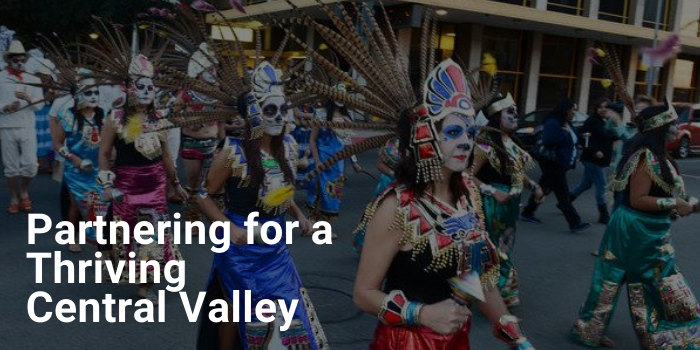 Our recent Embodying Equity blog series features a piece on our work in the Central Valley where we share about our approach to beginning and expanding our work in the region. For more than a decade we’ve built partnerships and deployed capital for a range of community development projects throughout the Central Valley including affordable housing developments, art and culture organizations, multi-tenant nonprofit facilities, and equitable food access. And we are only able to do this work because of the partnerships that we’ve cultivated and continue to build throughout the Valley.

Spanning over 450 miles, from the Tehachapi Mountain ranges just south of Bakersfield to the Cascade Range north of Redding, the Central Valley is home to nearly 6.5 million people; a population larger than that of most U.S. states. Comprised of two valleys, the Sacramento and the San Joaquin, the Central Valley is known as the bread basket of the world. The region grows 230 different crops and one-third of all produce grown in the United States, including crops indigenous crops to Mexico and Southeast Asia.

California’s agriculture industry contributes approximately $50 billion annually to the State’s economy, about $20 billion of which is generated by five of the seven San Joaquin Valley counties. The San Joaquin Valley is also home to large dairy and cattle operations, oil production, and various food processing and manufacturing companies; all of which contributes additional billions of dollars to California’s economy. Unfortunately, this economic abundance does not translate into reinvestment or economic benefits to the local communities in the Valley. The typical Central Valley resident is not cultivating wealth by working in or living near these industries.

It is true that the Central Valley, and its major cities like Fresno, have a relatively low cost of living compared to California’s larger coastal regions like the Bay Area, Los Angeles, and San Diego. However, the region is not necessarily a more affordable place to live. For instance, the median household income in counties throughout the Valley ranges from mid-$40,000 to $60,000 annually, compared to the median household income for California overall which is $82,000. Even within the same city, there are wide socioeconomic disparities. In Fresno, for example, between the North Fresno and Southwest Fresno neighborhoods there is a $15,000 difference in household income.

Influenced by many factors, development in Fresno has occurred along race and class lines creating social, economic, and environmental disparities. Fresno was built up around a railroad station that was established in 1899. The first general plan was developed in 1918 by Charles Henry Cheney and is known as the Cheney Plan. This plan codified race and class segregation in Fresno and set the stage for future development injustices as the city grew throughout the decades. While it called for a separation of land for industrial use and land for residential use, it also noted that employees of the trades and industries should be located near their places of work.

“The problem of congestion of population is closely related to the location of the trades and industries. Employees working long hours at low wages can neither afford the time nor the money to live far from work. Fresno wants no slums and cannot afford to put any hampering influences on industries; but this zone ordinance can provide adequate housing areas adjacent to the factory areas.” (Cheney 1918)

Economic inequities in communities like Fresno are compounded by environmental burdens that plague the San Joaquin Valley. Along with being big money makers for the State, agriculture and dairy, oil, transportation, and manufacturing industries are also major polluters of the soil, water, and air.

Home to four of the most polluted cities in the country, the San Joaquin Valley’s air quality has dangerously high levels of particulate pollution. The 2016 American Lung Association’s State of the Air Report found that one in six children living in the region suffers from asthma, some of the highest rates across the state and country. Major health risks are associated with particulate pollution such as heart attacks, stroke, cancer, as well as negative impacts on neurological and reproductive systems.

Fresno experienced major investment and development in the 1950s, 1960s, and 1970s, primarily through government urban renewal programs, as well as some private investment. Post-war revitalization through urban renewal was touted as an opportunity to improve housing in “blighted” or “slum” neighborhoods.

What this translated to in practice was large-scale demolition that forcefully displaced communities of color, immigrant communities, and low-income people from their homes. The construction of Highway 99 plowed directly through black business corridors and raised more than 20 blocks of housing. Because the freeway runs north and south, it also physically cut off the western neighborhoods from the economic development of the northeastern communities. Affordable housing projects constructed in the 1960s were concentrated in areas with heavy truck traffic and various manufacturing and animal waste industries. Private investment that came to the city in the 1970s was largely focused northwest of the downtown area, where economic development resources continue to be concentrated.

“The Central Valley has a legacy of disinvestment. This includes philanthropy and every type of financial investment. This legacy continues to this day with the exception of a few notable institutions that are leading the way showing that Valley communities not only deserve investment, but that they need to be smart investments.”

There is a growing focus in the San Joaquin Valley’s community development with new industries slowly navigating there, a focus on transportation oriented development, and the promise of deeper investment from the state in initiatives like Fresno DRIVE that promote locally sustainable economies.

As a Community Development Financial Institution (CDFI), Community Vision serves as a bridge between government, community planning, financial institutions and local community-based organizations and businesses. With opportunities growing in the region, these types of partnerships become even more meaningful in achieving real impact.

Our partnership with BBVA, for example, demonstrates how Community Vision collaborates for strategic impact in the Central Valley.

BBVA is committed to responsible banking and investing and has received recognition for their Community Reinvestment Act (CRA) investments. With locations along the 99, including one in Fresno and another in Clovis, BBVA’s geographic focus is aligned with Community Vision’s. For more than ten years, BBVA has been an institutional investor in Community Vision and an active part of our organization. John Chan, BBVA Senior Vice President, is a board member and a member of our Central Valley Advisory Group.

BBVA’s investment in Community Vision leverages our respective institutional resources for enhanced impact in the Central Valley. Along with our lending services, our Consulting team is especially active in the Fresno region. Through workshops and technical assistance, Consulting staff work with nonprofits and entrepreneurs to build up their financial and real estate readiness to access and manage loan capital from institutions like BBVA and Community Vision.

Population and industry growth are projected to continue throughout the Central Valley in the foreseeable future. It’s critical that economic and community development is driven by principles of economic and racial equity to ensure that future and current projects don’t further perpetuate the injustices of the past. All Californians, and the country more broadly, benefits from a thriving, healthy, and sustainable Central Valley given the region’s impact on our state and national economies. We look forward to continuing our role as a key partner in these communities. 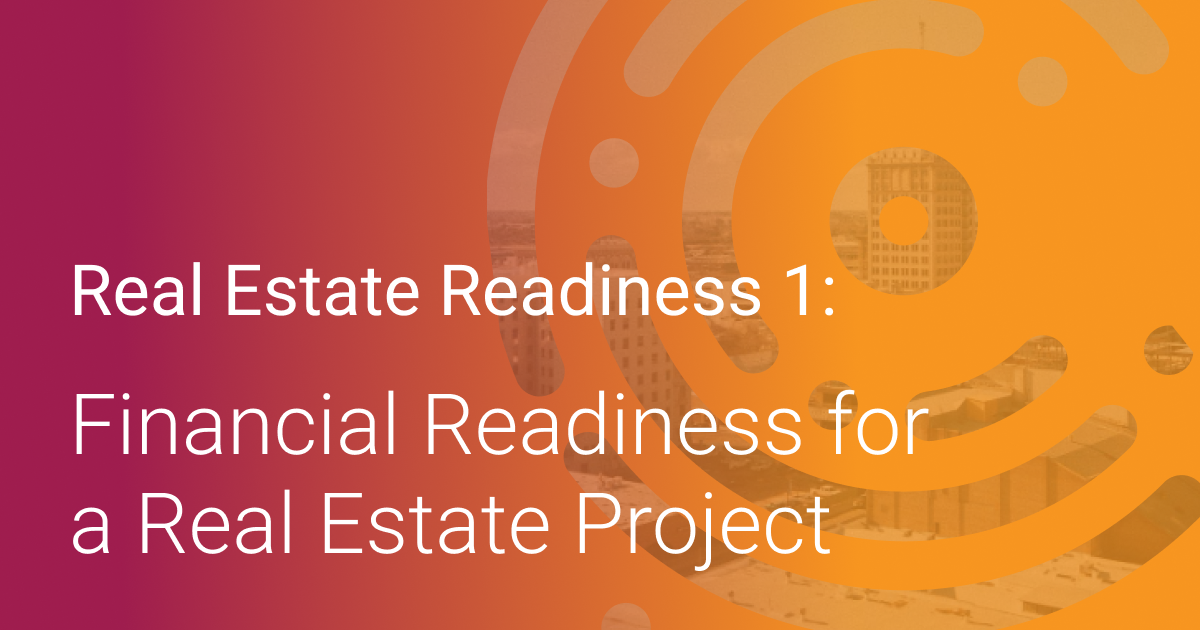 Join us for part one of our free, 3-part series designed for community organizations who are embarking on a facility project. This session will be a lunch and learn

Join us for part one of our free, 3-part series designed for community organizations who are embarking on a facility project. This session will be a lunch and learn (bag lunch, snacks provided) with special guest Esther Carver, Executive Director of Lowell CDC. Lowell CDC’s Mission is to improve the quality of life in the Lowell neighborhood through community engagement, equitable housing and historic diversity.

This first session will help you assess your organization’s financial readiness as we explore:

Lease Vs. Buy Considerations: How to Make the Best Decision for Your Nonprofit Join us for part two of our free, three-part series designed for community organizations who are

Lease Vs. Buy Considerations: How to Make the Best Decision for Your Nonprofit

Join us for part two of our free, three-part series designed for community organizations who are embarking on a facility project. This session will provide you with a decision-making roadmap on what space solution best meets your needs and will highlight: 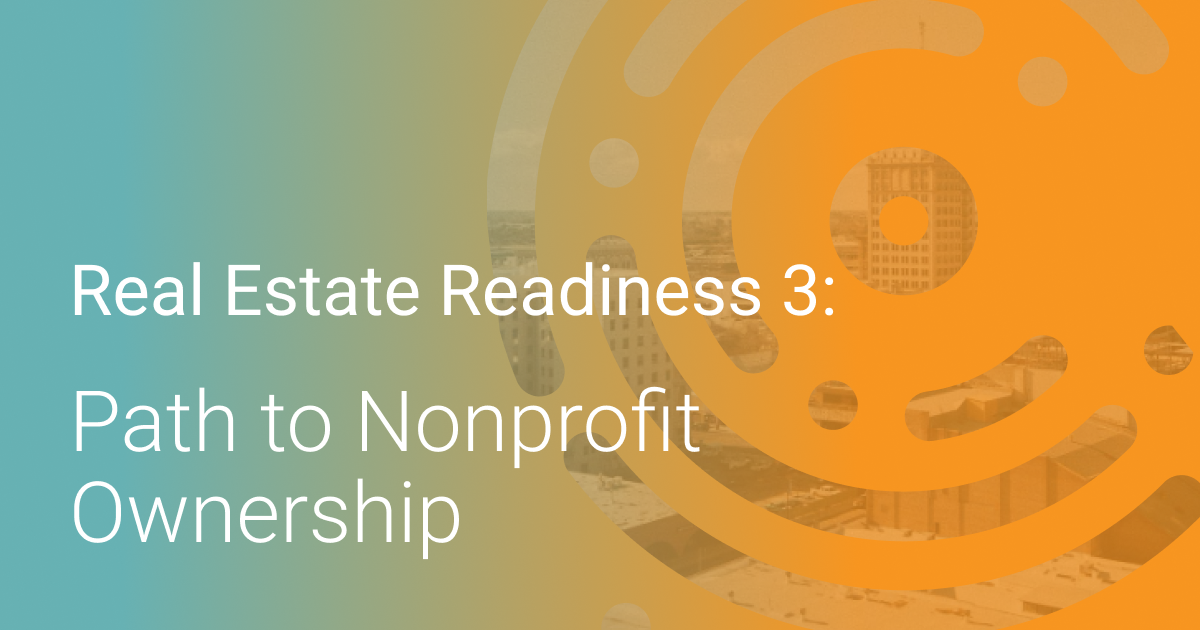 Deeper Dive: Path to Nonprofit Ownership Join us for the final session of our free, three-part series designed for community organizations who are embarking on a facility project.This session

Deeper Dive: Path to Nonprofit Ownership
Join us for the final session of our free, three-part series designed for community organizations who are embarking on a facility project.This session takes us deeper into what it takes to put your organization on the path to buying a building. Together, we will review: