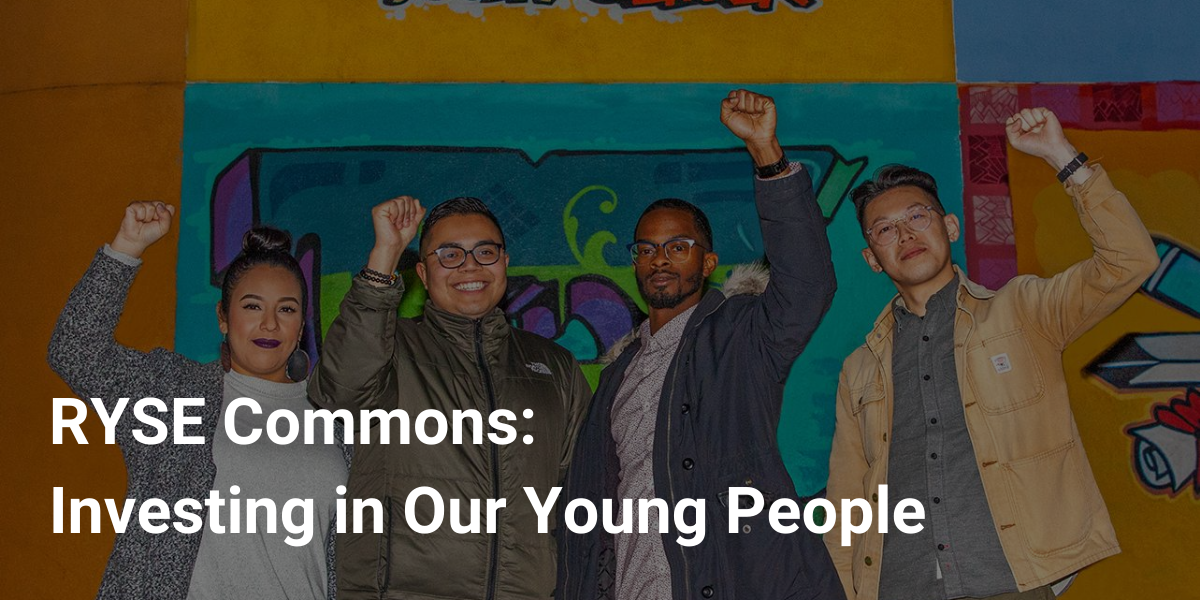 Based in Richmond, RYSE emerged from the needs articulated by local youth organizers of color following the killing of four high school students in 2000. After many years of planning, the organization opened its doors in 2008, addressing the emotional, mental and political health of local young people.

Since opening, RYSE has served nearly 4,000 young people, primarily youth of color, and has grown into a local anchor institution, offering a place rooted in social justice, where youth learn, grow, and respond to community needs. The nonprofit operates from the foundation that young people have the lived knowledge and expertise to identify, prioritize, and direct the resources they need to thrive.

Each young person involved with the organization is considered a “member” of the nonprofit, which cultivates a sense of belonging and ownership for those who may not often receive that level of respect. All programs and services offered arise from the needs, desires, and ideas of youth members and span the areas of health and wellness, education, restorative justice, media arts and technology, youth organizing and civic engagement, and more.

In 2019, Community Vision provided RYSE with a $2.7 million capital campaign bridge loan to support the construction of the RYSE Commons, which when complete, will expand the nonprofit’s space into a modern, 45,000-square-foot campus.

“Working with Community Vision felt like a true partnership. They were not just offering financing — they provided support and guidance throughout the process.”

Construction of the new campus began in September 2019, and includes the remodeling of the organization’s current building, as well as the development of an adjacent 11,400-square-foot two-story modern facility, located on a formerly empty lot. With the expansion RYSE will expand its age range to engage young people between 11-24 and increase its youth programs and partnerships by 300%.

When it opens in 2021, the RYSE Commons will be a dynamic campus for personal development, play, expression, incubating ideas, performance, art, launching businesses, exploring tech, and more.

Update: RYSE’s response to COVID-19 & the Black Lives Matters Movement
The construction for RYSE Commons was put on pause when the Bay Area went into shelter-in-place in March and picked back up in May with focus on maintaining worker wellness. RYSE is actively involved in the response to the pandemic and supports the community’s young people in multiple ways. Even in a time of physical distancing, the organization is staying in close connection with their youth members by offering daily online programming. In addition, they launched a Youth COVID-19 Care Fund, which has raised funds to support more than 200 youth members and their families.

The organization also brought together key stakeholders to launch the West Contra Costa COVID Community Care Coalition, a rapid response network that includes City and public systems partners, health and social services providers, and local school districts. This coalition supported the launch of the Richmond Rapid Response Fund, a wrap around initiative that meets the immediate and ongoing needs of the community during the COVID-19 pandemic. Beyond the pandemic, the fund will advocate for healing centered, racially just policies and investments for long-term community transformation.

The founders of RYSE created the organization to be a space that centers young people of color who are living in Richmond and West Contra Costa County. In this spirit, RYSE creates intentional spaces for local young people to express themselves and voice their experiences. In April, RYSE interns facilitated a virtual Youth Town Hall with more than 100 participants, where youth members discussed steps the community can take to support student’s health and well-being through the pandemic, shelter-in-place, and distant learning. In June, RYSE put out a call for adult allies to support black youth organizers and youth of color as they speak out against white supremacy and organize actions around the Bay Area.

Such outlets are critical, especially during these times of uncertainty, economic downturn, around a global pandemic and as momentum continues to build around the reckoning of racial injustices throughout the country in this country.

To keep up to date on RYSE’s work, check out their blog: rysecenter.org/blog