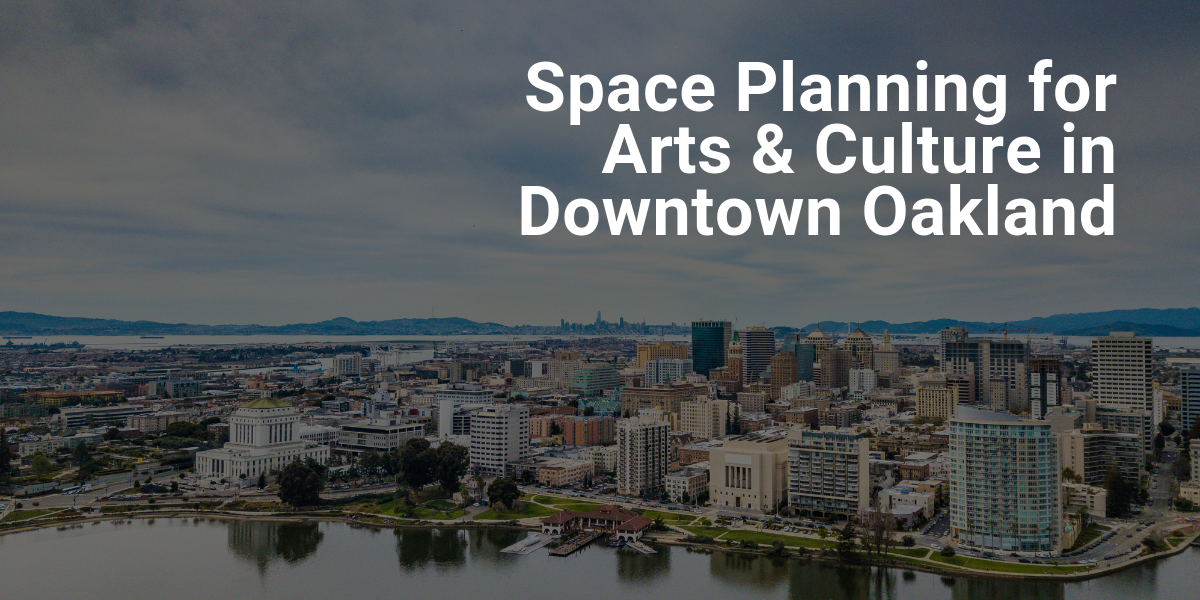 The City of Oakland has a rich and distinct cultural heritage that continues to shape civic life. In the face of rapid economic and cultural change, the history of arts and culture in Oakland gives insight into the evolution of its cultural richness and the potential for the future.

One of the most influential and important movements to occur in Oakland is the Black Arts Movement that began in the 1960s. The movement took place during a pivotal time in our nation’s history and it stood at the intersection of arts and political action. A blog by Dorothy Lazard, a librarian with the City of Oakland, details the crucial role artists played in bringing African culture and history to the forefront of the African American community, sparking both outward social action and inward empowerment. During this time, local venues hosted many African American artists and Afro-centric courses began being offered at Laney College.

The expression of the African American experience through the lens of art and culture continues to live on today through organizations like the Malonga Casquelourd Center, Joyce Gordon Gallery, Eastside Arts Alliance, and others. These institutions stand as physical embodiments of the city’s cultural history as well as pillars of the community today.

Organizations such as these also offer programming to serve residents in the community, providing community beautification projects as well as access to arts education and artistic expression. Many of their programs are free, making them accessible to residents of low-income communities.

In January 2019, the City of Oakland released a preliminary draft plan prioritizing the continued economic growth and development of Downtown Oakland in a way that considers the community’s desires and vision for the future. The overarching goal of the plan is to ensure future development is inclusive of those who have created the culture Oakland is known for as well as those most impacted by socioeconomic inequities. Within the larger goal are six focus areas:

Page 21 of the plan details how Oakland’s history as a major manufacturer and port city gained new expression. In the 1990s artists began occupying industrial spaces left behind by the steel industry, leading to the rise in galleries and arts spaces around the city,as well as welding certification programs at Laney College and California College of the Arts. Former Community Vision client, The Crucible, is a West Oakland arts space that exemplifies the re-purposing of these industrial spaces. The downtown Oakland area specifically serves as a hub for art festivals, protests, community gatherings, and retail shops owned by young entrepreneurs. Black-owned businesses, art spaces like Jack London Square, and distinct cultural neighborhoods such as Chinatown and Koreatown have not only cultural but economic significance as they are destination spots for visitors to the city.

The Culture Keeping focus is a unique aspect of the plan and it speaks directly to the preservation of arts and culture spaces as a primary goal for future development. In recognition of the cultural and economic significance of arts and culture venues, the City of Oakland seeks to not just maintain but also grow the arts and culture presence. We know through our deep history of work with Oakland cultural organizations that in the face of new development, arts and culture groups face the same pressures many nonprofits do, rising rents and an ever shrinking portfolio of affordable spaces that can accommodate their programs. This plan comes at a crucial time in Oakland’s development where economic pressures threaten to make downtown Oakland unaffordable for the institutions and residents that anchor and define the city and proposes different tools to address these issues.

One tool that is being explored is zoning and land use regulations. The City is proposing various regulations to promote the creation of arts and culture spaces as well as the stabilization of existing spaces. Specifically, they suggest creating an Arts and Culture land use category and expanding existing categories to accommodate a more inclusive view of the arts.

Updates to the land use categories will allow for a broader range of arts and culture uses to be housed in areas where it was previously not permitted. The more comprehensive range will be further utilized in their proposal to implement minimum space requirements for arts, culture, and PDR (Production, Distribution and Repair) uses in developments of a certain size. The plan also mentions requirements around addressing displacement of arts, culture, and PDR spaces caused by private developments. Developers would be required to either house the displaced use on site or provide a contribution to aid in relocating the space use. Land use and zoning is important because it gives artists and arts organizations the opportunity to engage in commercial activities and contribute to the city’s goal of keeping spaces available and affordable for the arts community. With the amount of new development taking place in downtown Oakland, these types of regulations could be a lifeline for organizations who are impacted by rising costs and loss of space.

Another tool the plan explores is investment in the upkeep of the physical spaces of arts and culture institutions that are deeply rooted in the community, such as the Malonga Casquelourd Center for the Arts and the Oakland Asian Cultural Center. In addition to the physical infrastructure, support would be provided to the organizations’ marketing and branding infrastructure, highlighting them as “premier arts centers.” This type of support could have long-lasting benefits to these organizations as capital improvements and marketing are essential to continued programming and utilization of a space. The City’s provision of financial assistance for facility upgrades as well as marketing and branding will assist these organizations with essential needs that are often difficult to secure funding for since they are not direct program expenses. These types of upgrades keep spaces safe, functional, and inviting, which preserves the long-term viability of arts organizations and the services they provide.

Since 2002, Community Vision’s Consulting team has worked with many nonprofit arts organizations, providing technical assistance in the form of financial management and real estate consulting to aid them in confronting these challenges. We have provided more than 950 consults to nonprofits across Northern and Central California who face the risk of displacement or barriers to growth due to similar economic pressures that Oakland arts spaces are now facing. Our work in Oakland has reached over 100 organizations and encompassed both real estate and financial planning.

During our time serving the community, we noticed that the trend of high cost of commercial rents and inability to secure long-term leases affects nonprofits throughout the area. We recognize the importance of these organizations as providers of crucial services and pillars of the Oakland community, and we are committed to coming alongside them in an effort to pursue long-term space security and improved financial health.

The draft Downtown Oakland Plan proposes many strategies that have the potential to address the key issue of displacement of arts and culture organizations. This highlights the City’s understanding of the importance of and commitment to ensuring these organizations continue to hold space in downtown Oakland. Given the wide range of ideas and proposals, the adoption of this plan makes a strong case for arts preservation as a key component to community development in the emerging downtown Oakland area.