Update on the Fresno DRIVE Initiative 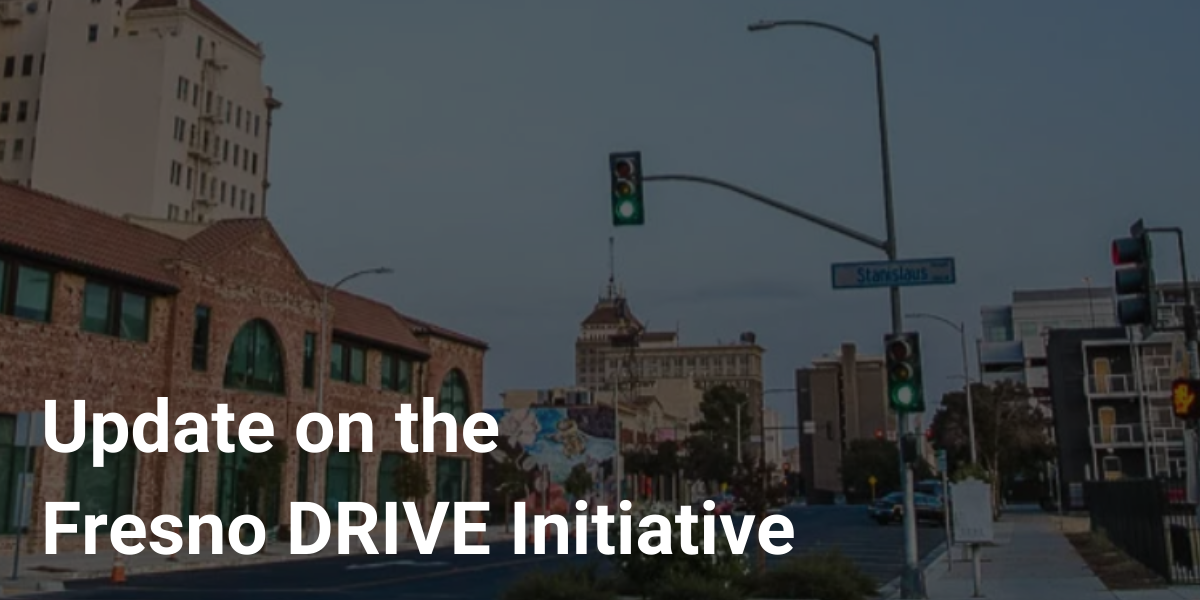 The 9th annual California Economic Summit took place in November, and was hosted in Fresno for the first time. Ahead of the Summit, Governor Gavin Newsom issued a challenge: What would it take to fundamentally transform the Greater Fresno Region by 2030 and create opportunities for all residents to achieve real economic mobility by fostering an economy that is inclusive, vibrant, and sustainable?

This question became the organizing call for the DRIVE Initiative (Developing the Region’s Inclusive and Vibrant Economy), a 10-year Community Investment Plan that was presented at the Summit. Sponsored by the Central Valley Community Foundation (CVCF) with support from the James Irvine Foundation, the DRIVE Initiative brought together 300 business and community leaders representing more than 150 organizations working in education, as well as community and economic development throughout the greater Fresno region. Luckily, many of these professionals have been in the trenches together working on these big issues for decades; and Central Valley communities are used to big challenges, like feeding the world.

Launched in July 2019, the DRIVE coalition engaged in four months of business planning that focused on:

The result was a DRIVE Community Investment Plan developed by 19 different Work Groups. Overall, nineteen community investment initiatives were identified and call for $4.2 Billion in investments over the next ten years to foster an inclusive, vibrant, and sustainable economy for all residents.

Of the 19 Work Groups, Community Vision found a role contributing to four, including:

In these Work Groups we collaborated with community development corporations, other CDFIs, business chambers, philanthropists, and business leaders to craft new projects and identify ongoing projects that if invested in, would be transformative to the Fresno landscape in an equitable and sustainable way.

Kiel Lopez-Schmidt, Community Vision’s Central Valley Regional Manager, took an active role in the DRIVE Initiative where he supported research, budgeting, and business plan writing. Participating in this initiative is a continuation of the work we began in the Central Valley more than a decade ago. We’ve provided capital and consulting services to many of the 150 organizations represented in the DRIVE process. We’ve focused our support within the neighborhoods that exist on the margins of opportunity and that have been historically excluded from economic development conversations and direct investment.

Fresno is one of the most ethnically diverse and fastest growing cities in the United States. It is also California’s least racially inclusive large city, and has one of the highest rates of concentrated poverty in the country. This is because development and economic benefits in the regions have not been shared equitably among residents. Therefore, it is important that these community investment initiatives are developed and implemented with a diverse representation of community. Recognizing the historical disinvestment among communities of color, racial equity is embedded in the 10-year Community Investment Plan and is a critical foundation on which to recalibrate economic investment as demonstrated by the goals of the DRIVE initiative.

It is platforms like the California Economic Summit where DRIVE’s work can be elevated and leveraged as a tool for aligning investments with the 10-year plan. As a key element of this year’s Summit the Community Investment Plan was presented to the Governor for consideration in the 2020-2021 State Budget.

Released on January 10th, Governor Newsom’s draft budget includes $50 million in investments for the Fresno region, which designates funds to components of the DRIVE plan. While there will be several months of negotiation until the final budget is released in June, this proposed investment is an encouraging step towards the vision for a transformed, and more equitable, Fresno.

Please download the plan and we’d be excited to connect with you about how we accomplish this work together.