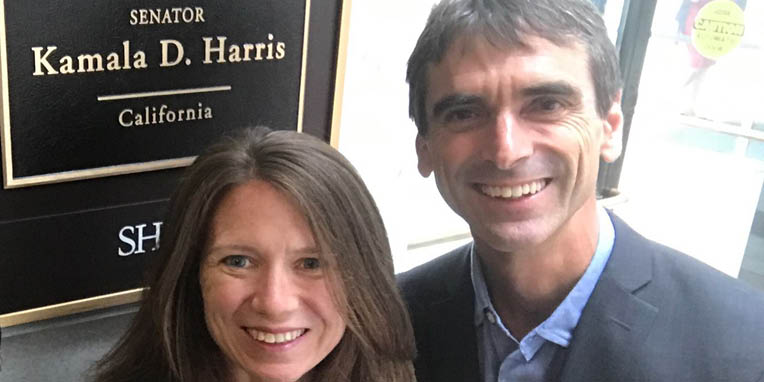 Last month I represented Community Vision in Washington, DC, joining Community Development Financial Institution (CDFI) colleagues from across the country to meet with legislators and their staff and advocate for continued federal funding for programs that CDFIs leverage to benefit low-income communities.

As you might guess, May 2017 was an interesting time to be on Capitol Hill. My first set of meetings—focused on the Healthy Food Financing Initiative (HFFI)—took place on the same day the House passed the American Health Care Act. I returned to the Hill on Opportunity Finance Network Advocacy Day, a week after former FBI Director James Comey was fired, when most of Washington was focused on the prospect of an independent investigation into Russian meddling in the Presidential election.

In this highly charged, partisan atmosphere, my colleagues and I heard from numerous legislative aides that the President’s recently released “skinny” budget proposal, which decimates the CDFI Fund and HFFI, as well as many social safety net programs, is a starting point for negotiations and is not where federal funding will end up.  With that said, most people on the Hill believe there will be stark cuts to federal resources that are instrumental in funding social services, economic development, affordable housing, and other critical programs in low-income communities. Even programs with broad bipartisan support, such as New Markets Tax Credits, are vulnerable as the new administration works to shift funding and attempts to restructure the tax code.

All of the Congressional staff I spoke with emphasized the importance of people contacting their Congressional delegations and advocating for programs such as the CDFI Fund, which play an important role in communities, but do not grab headlines. Representative Maxine Waters, a huge champion of CDFIs, was particularly adamant that we work with our partners to make our voices heard, and educate the public on the important role federal funding plays in our work. Representative Waters spent 45 minutes with a delegation that included Community Vision, Capital Impact Partners, and the Opportunity Finance Network, underscoring her concern that individual citizens do not know how much is at stake in the federal budgeting process, because they do not connect federal funding with resources they see in their community every day. She urged all of us “stop being humble” and actively tell our story in a manner that makes clear the importance of federal funding in our work.

Overall, my time on the Hill reinforced for me the turbulent era which we find ourselves in, and the importance of policy and advocacy work for CDFIs. It was heartening to hear strong support for CDFIs, and the communities we serve, from Senators Feinstein and Harris, and Representatives Costa, Panetta and Waters. But this support cannot be taken for granted. CDFIs and our supporters need to continue to make our voices heard, and make clear to both Republicans and Democrats why supporting our work is important.

Community Vision is in the process of developing our strategic plan for 2018-2021. We will build upon our efforts with an increased focus on strategic policy and advocacy work, for the benefit of low-income communities throughout Northern and Central California.  We will update you as these initiatives develop.

COVID-19 Resources
COVID-19 Resources
X
We use cookies to ensure that we give you the best experience on our website. If you continue to use this site we will assume that you are happy with it. Privacy PolicyOk